By The Military MutualMay 7, 2015Events
No Comments

The 70th Anniversary of Victory in Europe (VE) Day is set to be a huge weekend of remembrance and celebration. On 8th May 1945, Nazi Germany surrendered and peace in Europe was declared. People came together to party on the streets, united by joy and relief. Seventy years on and there are special plans afoot to commemorate the sacrifice, bravery and resilience of the World War II generation. From large gatherings in Central London, to organised street parties around the country, the weekend of the 8th – 10th of May promises to be a busy one. 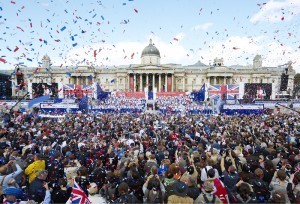 Central London – Over the Three-Day Weekend

1. Floodlit monuments from 8th to the 10th May

For the duration of World War II, London along with the rest of the country underwent strict blackout rules. There were no streetlights permitted or windows lit up. l All that changed on 8th May 1945. Brightly lit streets were filled with elated, excited crowds. The contrast must have been remarkable. In honour of this historic event, the Houses of Parliament, St Paul’s Cathedral and Trafalgar Square will be floodlit, as they were in 1945, with a giant V for Victory.

2. Friday 8th May – A Day of Remembrance

A service to commemorate the fallen will be held at the Cenotaph, with representatives from the main political parties, the armed forces, veteran groups and charities in attendance. A two-minute silence will be held across the Nation at 3pm, marking the moment when Winston Churchill declared the surrender of Germany.  This will be accompanied by ceremonial fire in London, Edinburgh, Cardiff and Belfast, as well as by the Royal Navy at sea. One hundred beacons will then be lit across the UK in tribute.

At 11am, churches and cathedrals across the country have been invited to ring their bells to mark this historic event.

Horse Guards Parade will be hosting a 1940s themed, ‘Party To Remember’ Royal British Legion Concert, with an incredible line-up of international artists and celebrities.  Headline performers include the likes of Katherine Jenkins, Status Quo and Pixie Lott. The event is ticketed and will be broadcast by the BBC.

A service of thanks giving will be held in Westminster Abbey, attended by members of the Royal Family, veterans and their relatives. Representatives of allied nations and Commonwealth countries, government figures and senior members of the military will also be there.

A parade of 2,000 serving members of the armed forces and veterans will march to Whitehall, passing by the spot where Winston Churchill made his public appearance on that day 70 years ago. Members of the public will be invited to line the streets between Westminster and Whitehall, to show their support. Veterans will then be invited to St James’s Park, where the Royal British Legion is to host a reception.

A fly-past, by the Royal Air Force and the Red Arrows, including some of our most iconic planes will take place in the afternoon. Look out for the Hurricane, the Spitfire and the Lancaster Bomber. Once again, the BBC will be filming events as they happen, so you can watch from home.

If you’re into good music, check out VE Day at 70 from the Royal Albert Hall.

The night will be hosted by Classic FM’s John Suchet and Myleene Klass and will feature special guest performers Katherine Jenkins, Rebecca Ferguson and Wynne Evans, as well as a special appearance from members of Sir Winston Churchill’s family.

If you love old cars and a bit of nostalgia, check out the 1940s vintage car display in St James Park.

5. How to find out about VE Day festivities near you:

Across the UK, hundreds of organised events are being planned to mark the 70th anniversary of VE Day. From 1940s tea dances and swanky gala dinners to street parties and cream teas at your local church. Why not check out what’s being organised in your hometown? The Government has set up an event map for more information.