By The Military MutualMay 29, 2015Real People
No Comments

The UK phased out National Service in the 1960’s, saving young people from a compulsory year or two in the armed forces between the ages of 17 – 20 years.   However, many other countries still insist on National Service which can be a problem for football teams and their international star players.

The need to make some people exempt has always been recognised.  In the UK, the last National Service Act (1939) waived the rule for university students, married women and a few key job types such as farming and coal mining.

In the past, sports people have not usually been exempt, however famous.  These days the skills of top footballers are much more important for national reputation then they used to.  So some of the world’s great players have been able to go on playing.   It wasn’t always easy, though!

This Arsenal defender was apparently too tall to do military service in Germany.  The 6’6 Gunners centre back has said that he wrote to the military authorities to inform them that he could not fit into a tank or submarine.  His request was  successful, though the 30 year-old did make his contribution to the nation by working in mental health clinics for a while. 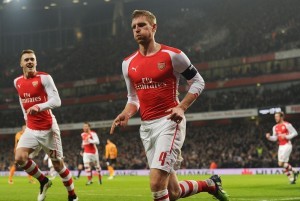 Vidic left his home town of Uzice for Belgrade at the age of 15 and joined the Red Star.  At the time of a NATO bombing campaign which targeted both Uzice and Belgrade he could have been caught up in the action.  Luckily he had visited an army training camp just two days before to hand in the paperwork which excused him from national service as a professional footballer.

Yossi Benayoun was 18 years of age when he joined the Israel Defence Forces (IDF), as there was no avoiding military service which is absolutely mandatory in Israel.  Fortunately army service is flexible for professional athletes and Benayoun’s career as a footballer was not compromised.  He continued to play in the Israel league and maintained his professional career.

The former Chelsea and Egyptian winger Mohamed Salah was almost forced to return to his home country to fulfil his military obligation until he was given permission to stay at the premier league club and continue his promising career.   The 22 year old footballer could have been exempt as a student but cancelled his enrolment to one of Egypt’s education institutes, putting his sports career at risk.  Chelsea benefits as the Egyptian government took a broader view of the service he was doing for the nation.