By The Military MutualSeptember 18, 2015Events
No Comments 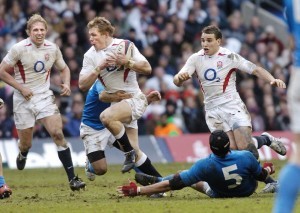 Keep your fridge well stocked and invite some friends around – it’s going to be a good one!

For decades, the military have actively encouraged participation in professional sport and continues to maintain a strong link with rugby union. Balancing the demands of forces life with the rigorous training required to reach the Premiership in any sport is not an easy task. For those talented, committed individuals who are striving for excellence, the support and help found within the services is second to none.

Over the years there have been some phenomenal military players that have gained worldwide recognition. Big names include:

Former Officer in the Royal Regiment of Wales

Will Carling (retired), who commissioned into the Royal Regiment of Wales before resigning to concentrate on his professional rugby career. He was the youngest ever England Captain at the age of 22. He achieved 72 caps for England and represented the British and Irish Lions.

Troop Commander in the Royal Artillery in 2001

Former World Cup winner, Josh Lewsey passed out of Sandhurst in 2001 and joined the Royal Artillery. For two years he juggled his professional rugby life with his military career before resigning his commission. In 2009 Lewsey retired from international rugby. He is now the Head of Rugby for the Welsh Rugby Union.

Former Captain in the Green Howards Infantry Regiment until 2001

Tim Rodber, a rugby union player (retired) played for the British and Irish Lions as well as for England, earning 44 caps. Throughout his professional rugby career, he served in the army as a Captain in the Green Howards Regiment.

Rob Wainwright (retired) a former Rugby Union player managed to maintain a professional rugby career alongside his military life. Having been commissioned into the Royal Army Medical Corps as a doctor, he went on to achieve 37 caps for Scotland and also played for the British and Irish Lions.

Semesa Rokoduguni currently serves in the Royal Scots Dragoon Guards.  Fijian-born, he is the most successful military player in men’s rugby today. Despite operational commitments and a demanding job, he plays for Bath and has attained International status, having represented England in 2014.

There are some hugely talented premiership rugby players within Defence as a whole. Not least, the three members of the Army Rugby Union Women’s team who have been selected to join the England Academy Squad this year. Such success has been earned despite the difficulty of having to take time out in previous seasons for operational duties in Afghanistan.  They follow in the footsteps of their current team captain, Corporal Jane Leonard, who has been capped at International level for England 15’s 9 times and capped 20 times for England 7’s.

The Three Military Women In The England Academy Squad This Year:

Gemma has played rugby since she was 15 years old. Starting off with 7s before sampling her first 15s game at the U20s England Trials. Having played for Exeter University, she’s now a regular player for the Army and Combined Services Teams as well as her Premiership club, London Wasps. She has since earned her first International cap for Wales.

Rosie took up rugby in 2008 during Phase 2 Training and has rapidly developed into a Premiership player.  She captained the Combined Services Squad in 2010 and has more recently played for London Wasps.

Bee is a talented sportswoman who started to play rugby at the age of 15. She began her first season with the AGC and Army team in 2011, having spent previous years playing competitive football. She now plays for Wasps first team and is said to have a great deal of potential.

With such an exciting season ahead of them, we wish all our military players the very best of luck and look forward to seeing them in action!