By The Military MutualNovember 6, 2015Events
No Comments 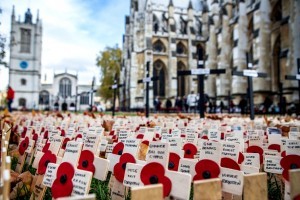 At 11am on the 11th November every year, Britain and indeed many parts of the world observe a two-minute silence to remember the men and women who sacrificed their lives for our freedom. It is a chance to reflect and pay tribute not only to those who died in the First and Second World War but casualties of all subsequent conflicts. Poppies grew in abundance around the war-torn fields of France and continue to be used to symbolise both remembrance and hope.

So where can you go to commemorate Remembrance Day this year?

On Saturday 7th November the Royal British Legion will be hosting the annual Festival of Remembrance to commemorate the fallen. There is both a matinee and evening performance.  The BBC will also broadcast the highlights of the evening.

Headline acts include Rod Stewart, Andrea Bocelli and Pixie Lott, who will perform beside the Central Band of the Royal Air Force, the Band of HM Royal Marines, the Band and Pipes of the Brigade of Gurkhas and the Queen’s Colour Squadron.

Thousands of poppies will be carefully placed in six Remembrance fields around the country to commemorate the members of our Armed Forces who’ve lost their lives since World War I.

The Field of Remembrance in Westminster Abbey is officially open to all visitors between 9am and 4pm until the 15th November.

If London is too far, find a Field of Remembrance near you. With the aid of Royal British Legion volunteers, five Fields of Remembrance have been organised around the country. They include:

Join the nation in Remembrance and honour the two-minute silence as you stand amongst a sea of poppies, each paying tribute to a named soldier.

The Royal British Legion will host the annual Remembrance Sunday event at the Cenotaph in Whitehall, London on the 8th November. It will involve a Service of Remembrance followed by a parade of leading dignitaries, serving members of the Armed Forces and veterans. If London is too far to travel, there are many churches and communities around the country that will be commemorating the event locally.

On Armistice Day, join the Royal British Legion and listen to music and readings in Trafalgar Square before marking a two-minute silence at 11am.

On Remembrance Sunday, a service will be held in front of the Armed Forces Memorial at the National Memorial Arboretum. There will also be an Armistice Day Service on the 11th November.

Opening Times
We use cookies to ensure that we give you the best experience on our website. If you continue to use this site we will assume that you are happy with it.OkRead more